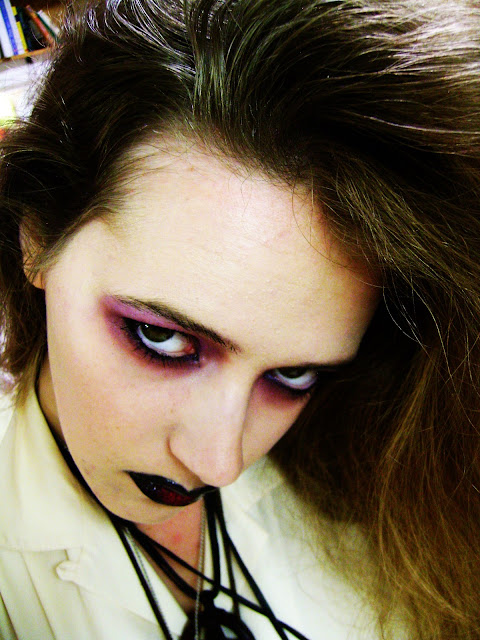 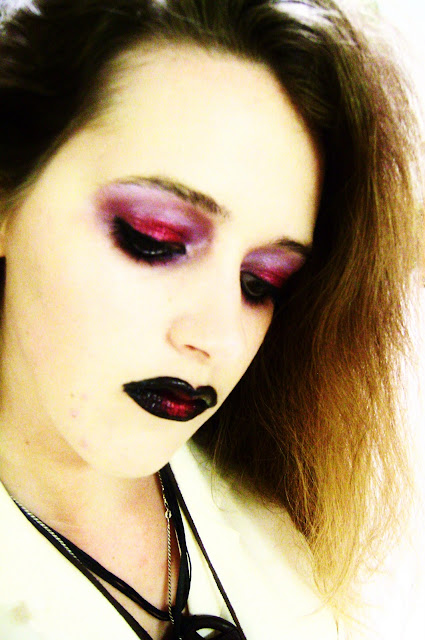 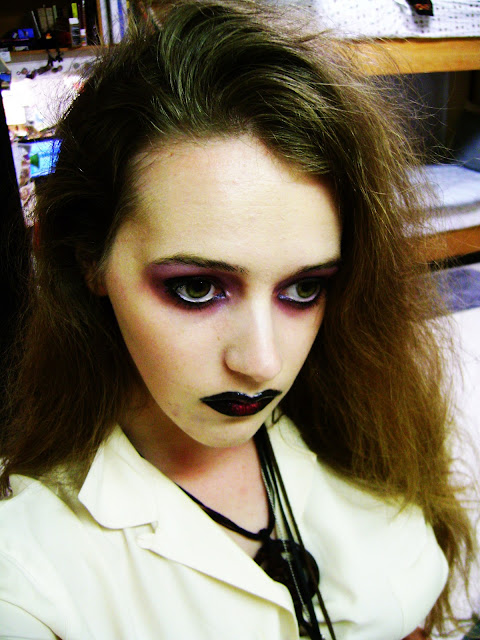 "So what does Nina Hagen have to do with it?" you ask coyly, certain that you've caught me this time.
"THIS is what Nina Hagen has to do with it," I will say, pointing proudly at the image below. If you must know, I actually filmed myself lipsyncing to "New York, New York﻿" with this look on for the hell of it, but you will only ever see that if you manage to creep into my dorm room whilst I lie sleeping, blissfully unaware of your serpentine sneakiness hacking its way onto my computer. 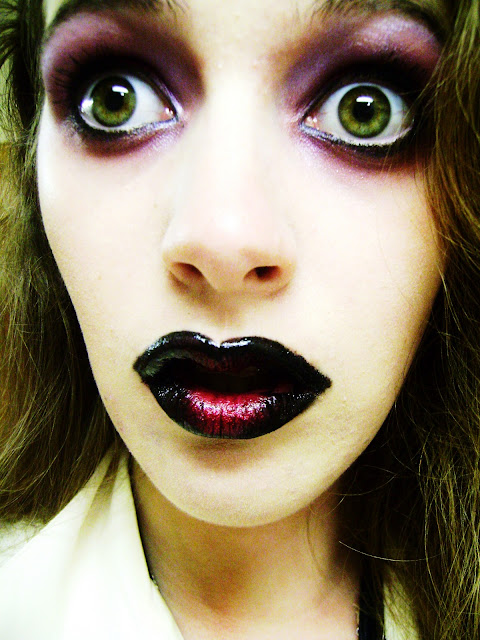 I never hope to see one;
But I can tell you anyhow,
I'd rather see than be one.
I have to disagree with Mr. Gelett Burgess on this one. Would it not be wonderful to see a purple cow?
And when it comes to being a purple cow... well, steep some tea, chop some chocolate, and grab a fuzzy blanket, because I'm going tell you a story.

Once upon a time in a far away kingdom, there was a girl named Lovely Wednesday. On Lovely's first day of middle school, she met a boy named Taylor who played the saxophone. Everyone at Lovely's school was surprised to hear they did not know each other, much less that they were not cousins or brother and sister, because everyone at Lovely's school observed that Taylor and Lovely looked very much alike (in truth, their connection went no farther than that both would one day study under the magical musical prowess of Queen Maryjean of the Holy Sisters of the Gaga Dada, but that happens to be mostly irrelevant for now). One wednesday (and a lovely wednesday at that), the boy Taylor said to the girl Lovely, "You look like a cow."
It may be my professional duty as a narrator to mention that this was not said with any malintention, and that the boy Taylor was probably completely unawares of how that may have sounded to the girl Lovely and the onlooking Princesses Bam Whammity and Naked-As-A-Jaybird, and there was probably some context in which this all made sense that I have long since forgotten, but the fact remains that the boy Taylor did say to the girl Lovely, "You look like a cow," and all that Lovely thought was, "How funny that everyone says we look so much alike!"

On a side note, the reason that that story is relevant to this post is because I have always thought that if I were to look like a cow (or if I do), I would very much like to look like a purple cow, which, as I am just now realizing, may have something to do with my desire to dye my hair purple this coming summer (Knight Bus Purple? Lilac? Can't decide, but we shall see, shan't we?).
In any case, I feel that I have now fulfilled my duty as keeper of the story of Her Royal Highness the Indian Princess Girl-Who-Looks-Like-Cow, and will now swim fish-like through the murky waters of possibly-related topics such as the collected poetry of Gelett Burgess and grape-flavored milk (ick!) to what I really wanted to talk about, which is purple cars, or, more specifically, the purple car that I saw out in front of the post office today: 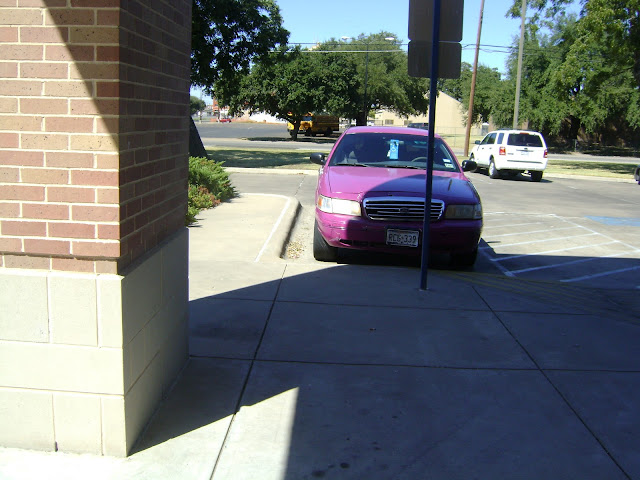 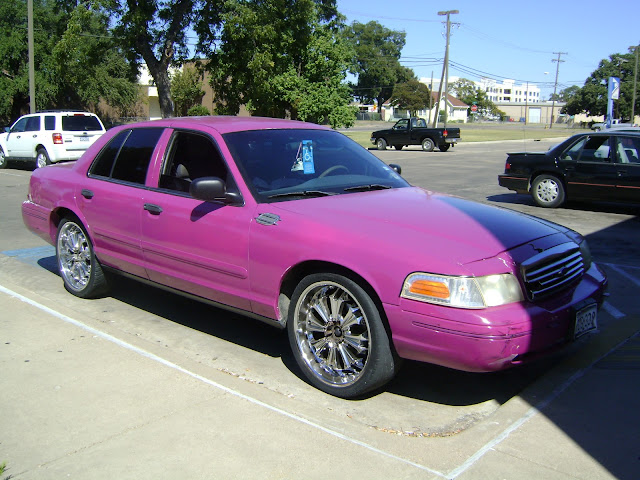 Immediately after I snapped the above photograph, the owner returned to the car and insisted that the other side of the car was prettier, and that I should capture it as well. I can't honestly say that I see much difference between the two sides, but as a girl who unfortunately did not recieve the car gene, I can't much tell the difference from one car to another but by color, which is obviously how I picked this one out
(the exception is Herbies--I have a VERY keen eye for Volkswagen Beetles, old and new, and will,
to put it lightly, "whoop yo' ass" at the Herbie game. I don't do the whole
"punch the person next to you" thing, but I am fiercely competitive about my Herbie points). 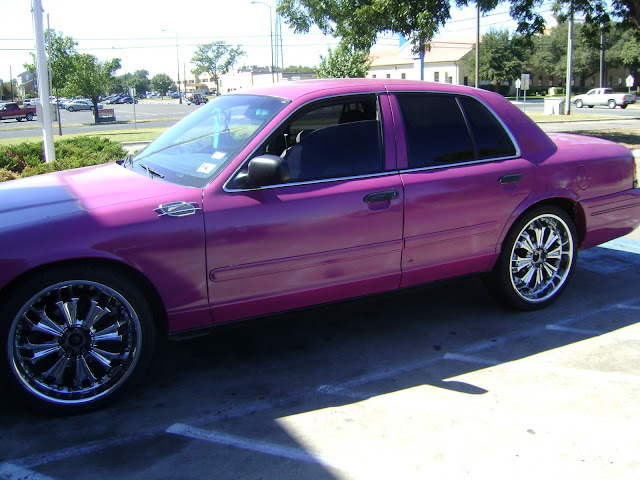