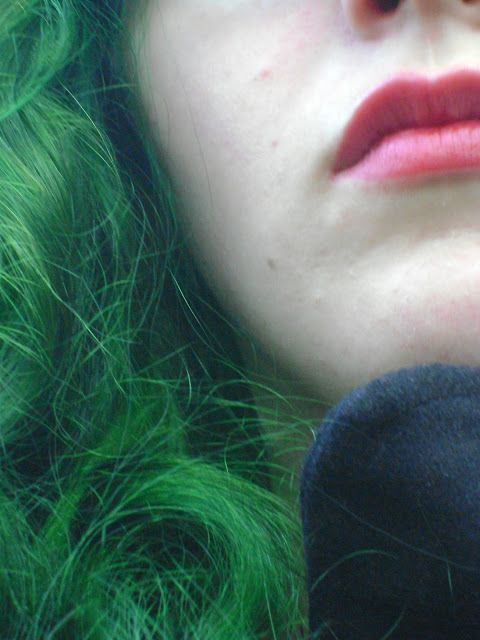 Inspiration:
My university "family" threw a Christmas costume party, and I went as a Christmas tree. I wore a green plaid taffeta bubble skirt dress, brown tights, brown snakeskin Betsey Johnson heels, made construction paper presents to tape to my legs, sprayed my hair green (actually, my friend Ethan did the spraying for me), and clipped in a giant gold star I'd made.
I was amazed and pleasantly surprised to find out that the green actually looked good on me, which was confirmed by the onslaught of, "Dude-you-could-actually-pull-that-off"s, and that was when I finally settled on what color I was going to dye my hair.
After jillions of hours of google-imaging, I decided I wanted something that reminded my of the green letters on the black screens of old computers, slash something that could have been on the cover of the Half Blood Prince, slash kelly green only darker and prettier. Turns out, Special Effects makes EXACTLY that color, so I guess I'm not the only one. Cool. 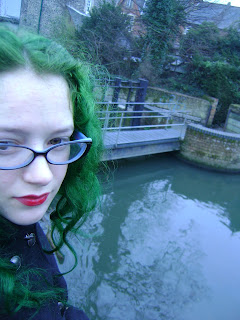 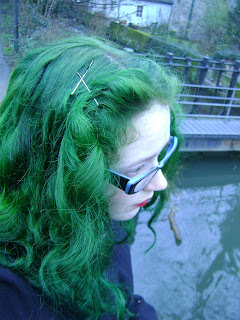 Process:
My dear friend Emma Dahling and her wonderful mother helped me do this (aka did this for me).
'Twas done by lightening my natural hair color with 30 volume bleach, and then steeping it in Special Effects Iguana Green for... 1, 2, 3, 4...
...roughly 16 hours.
It probably would look the same now if I'd only left it in a couple hours, but I'm told that leaving it in so much longer will help it hold up better, and that since Special Effects dyes are vegetable-based, Leaving it in super long would not damage my hair. I'm incredibly excited.
Really.
Posted by Lovely Wednesday at 1:02 AM 1 comments