IBCing You (aka I love root beer)

These pictures were taken in my backyard yesterday, most of them by my beautiful boyfriend Rafferty. <3
The kepi is his. 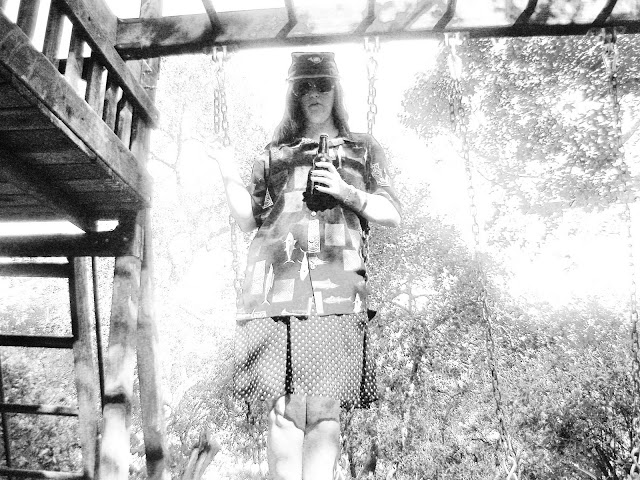 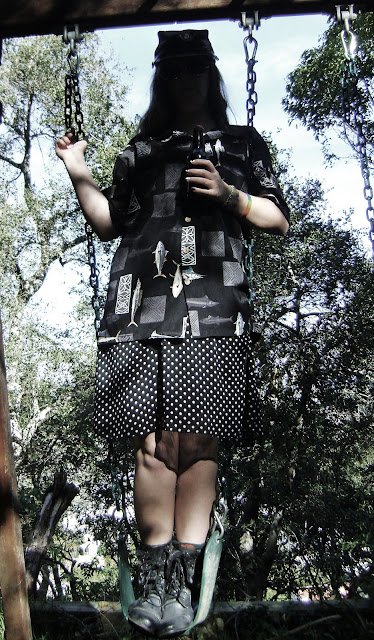 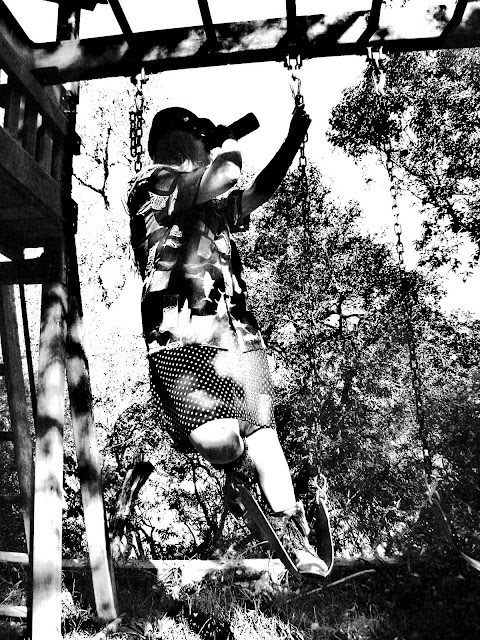 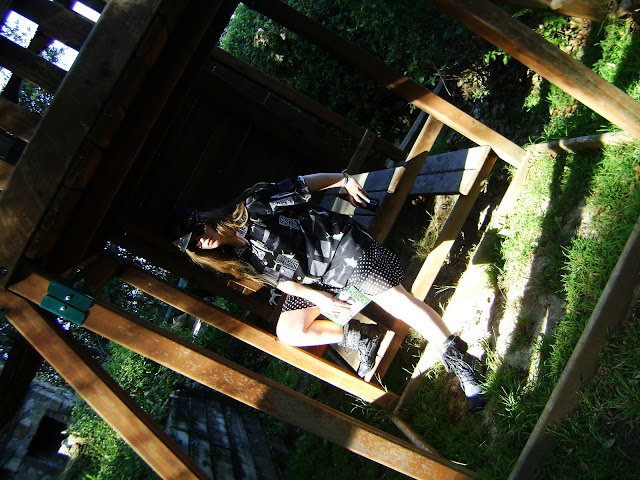 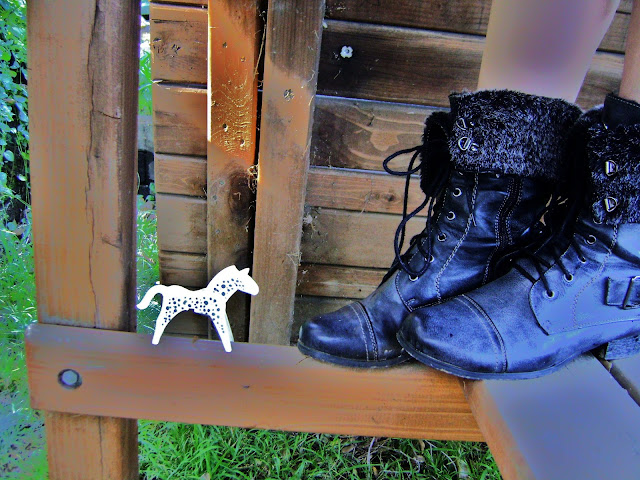 Toy horse supplied by Playmobil... aka from my endless collection of child's things I totally still play with. 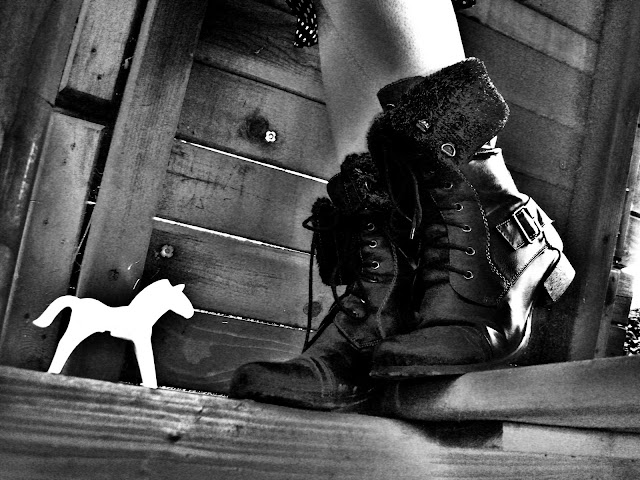 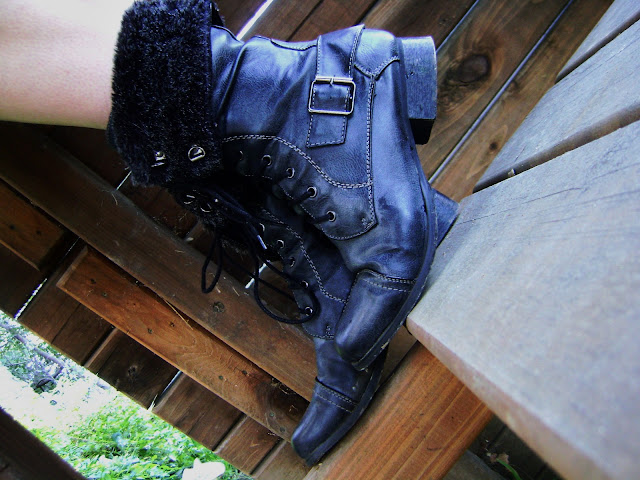 I'm in love with these shoes, not least because they're incredibly comfy. I bought them for my trip to the Netherlands this coming semester (I leave January 26th!) because they are warm, comfortable walking shoes, even though the leather and fur are both fake. The fur is inside to about twice the length that is folded over, and they lace on the front and zip up the inner sides. The brand is Groove, and I bought them at Marshalls in Carson City, Nevada (we drove from Los Angeles up to Alturas to visit my uncle on his ranch for Christmas, and spent the night going up in Carson City). I wore them a little bit up there to ride, as it was quite cold, and just the other day (when these photos were taken) to camp on Colorado Blvd for the Rose Parade. 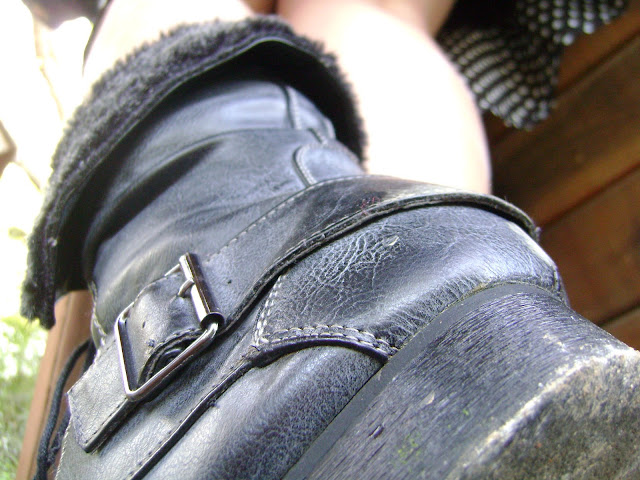 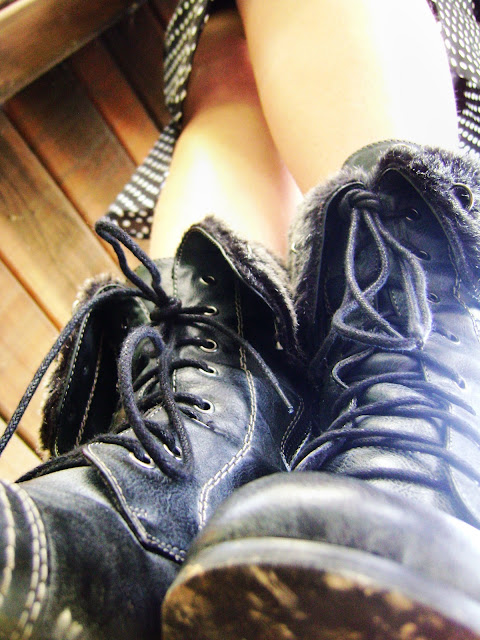 I think my boyfriend needs to photograph me more... I'm loving the results. <3 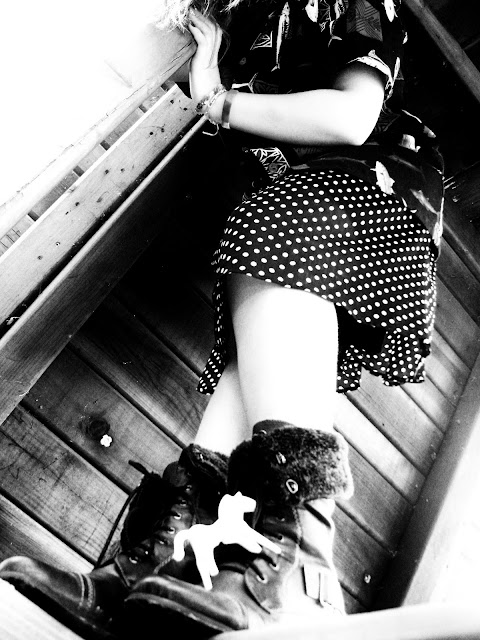 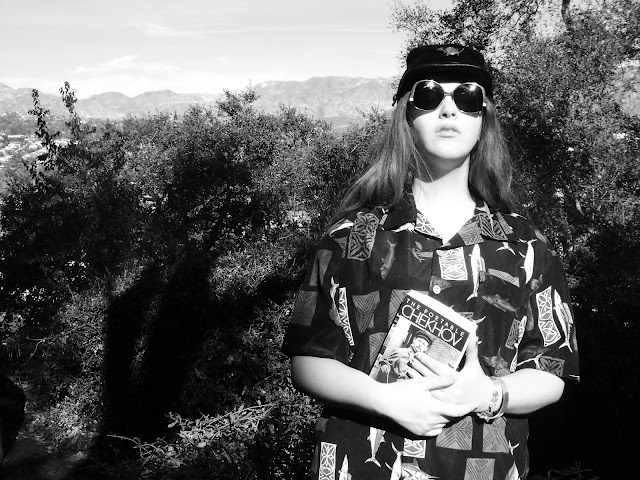 I won this shirt in a holiday gift exchange... it's incredibly soft, and I think the perfect balance of masculinity/femininity for a girl who wants to jaunt around in men's Hawaiian shirts but still look good. Then again, that's just me. 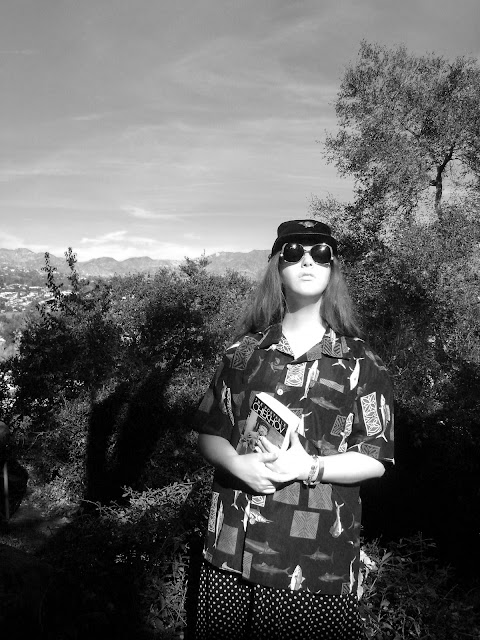 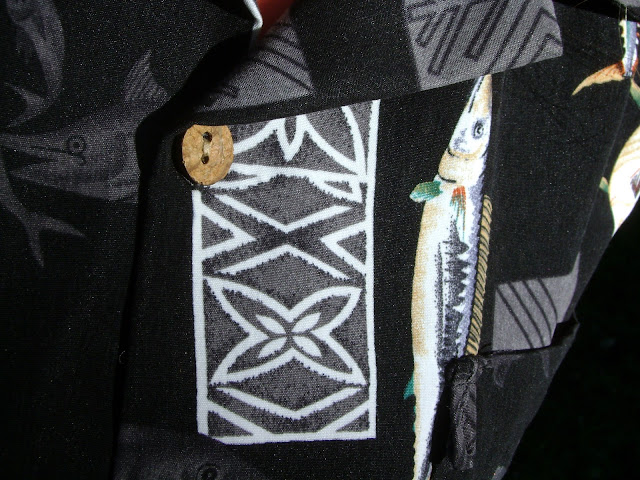 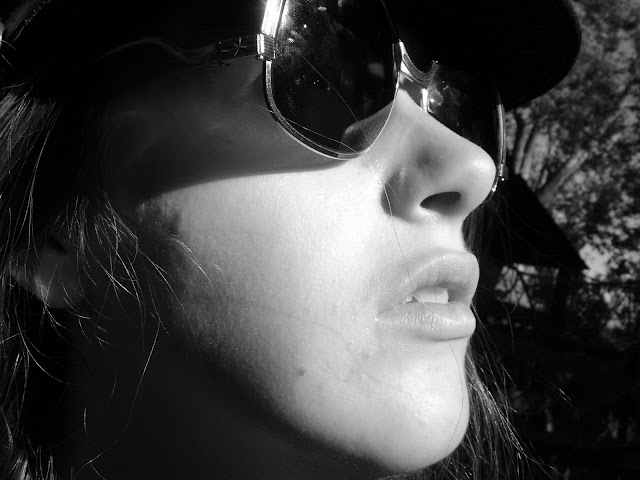 These sunglasses were a miracle find. I saw them lying around at this great antique shop near Alturas for $8.00, and thought they were awesome... but of course cool vintage sunglasses for me are a losing battle, since I wear glasses and don't have the patience for contacts. But, I thought I'd try them on anyway just to see how they looked... since, you know, a girl can dream. I slipped 'em on, checked the mirror, smiled a sad smile, and took a quick look around... and noticed that I was able to read the posters on the walls.
"MOM. I CAN SEE."
"What, honey?"
"I CAN SEE IN THESE GLASSES."
And the rest is history. :) 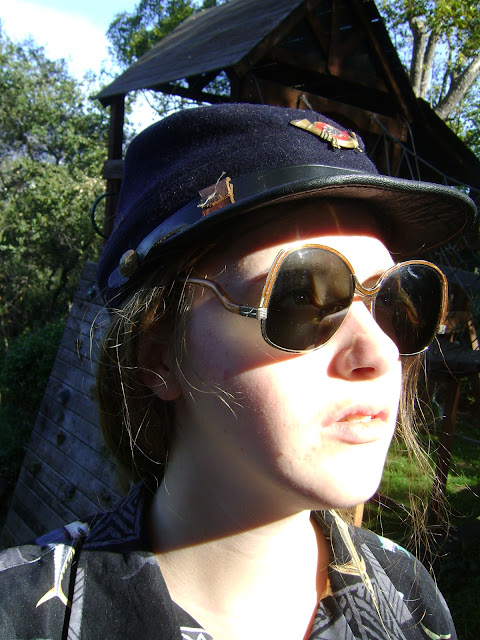 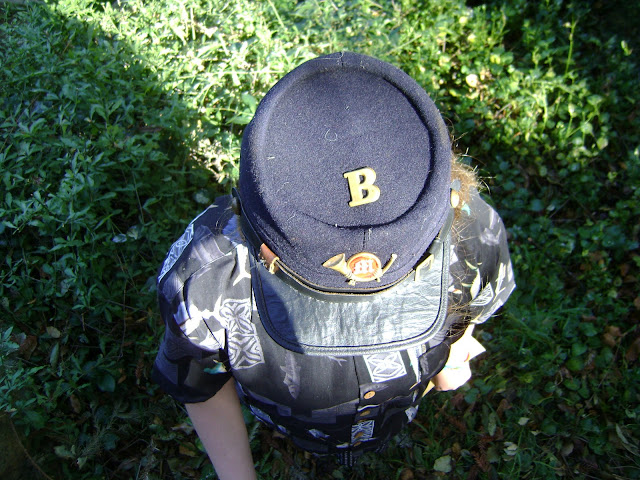 Reproduction sergeant's Union kepi for the marines, circa 1863. Navy wool, wood-lined, with black leather brim. Used for reenacting with ACWA's Confederate Marine Infantry, Co. B. It's my boyfriend's. 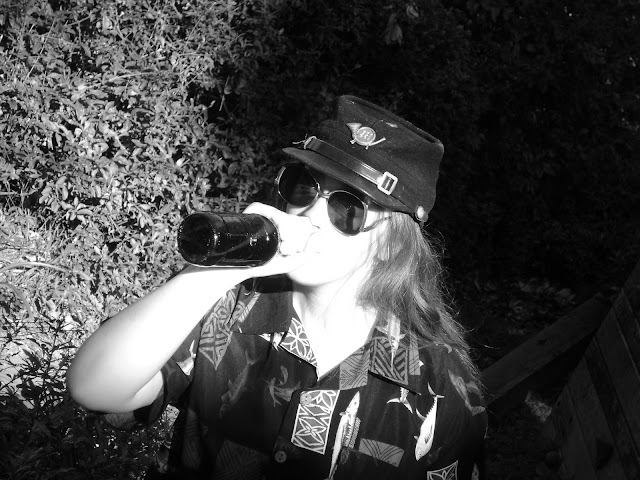 IBC Root beer is by no means my favorite, but hey--it's still root beer, and I'm a fanatic. All that glitters may not be gold, but it's still glittery. Virgil's is my favorite, then A&W or Mug (I go back and forth with those two), then IBC, as far as major brands go (although typically the less major the brand, the better). Virgil's is really a breed all it's own--the only place I know to carry it is Trader Joes. Check it out.
And, no, I don't drink. I'm only 19 and live in the US so it shouldn't really be a question whether I do or not, but I'm also in college and what happens happens, so it really is a question, and for the record the answer is no, I don't. While we're on the topic, I also don't smoke or do any drugs. My soul is slightly torn between the part that abhors smoking and smokers for breeding idiocy and illness and the part that knows how damn classy a good pipe looks. Or those cigarette holders from the '20s. Look good in 20 years versus have a good looking pipe now? I picked the former, that's all. Enough moral babble. Fashion. 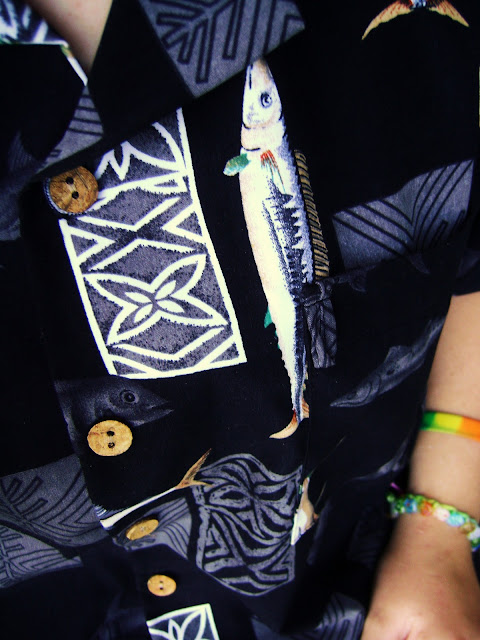 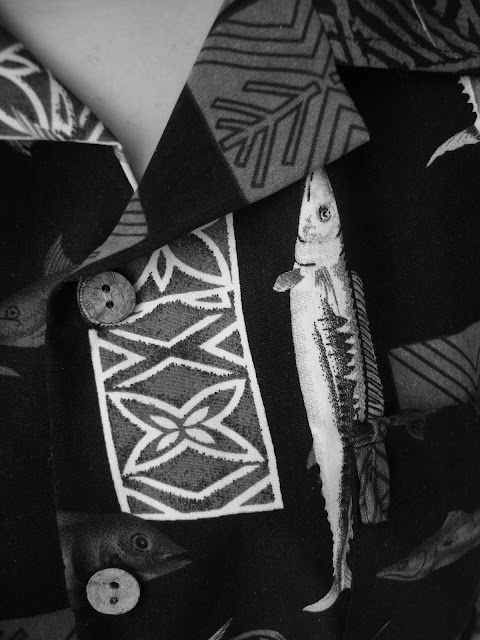 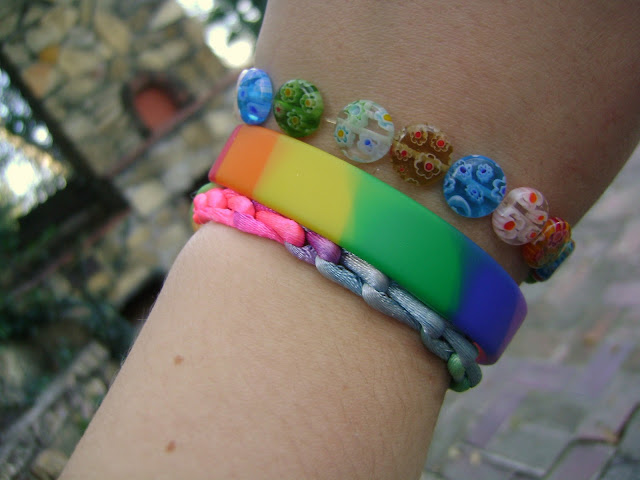 My rainbow bracelets! As I've mentioned, I have a boyfriend and I identify as straight, but as I have probably also mentioned, civil rights and freedom of expression are the absolute most important issues to me in politics, and I serve as founding secretary of SIF (Sexual Identity Forum) at Baylor University. SIFemBears.com
I wear my rainbow out of pride for the difference my (and our) work makes and has made, out of love for my friends and for all people however they identify themselves, out of respect, out of support, and as a symbol that those who know and believe in what the rainbow stands for are not alone. Sporting the rainbow does not mean you are gay or bi; it does not mean you agree politically or morally with "gayness" (is that pc? I don't know)--all it means is that you are a safe person with whom to talk, to whom you can be "out," and with whom you can freely be yourself.

That's all, folks.
Best of the best,
<3LW
Posted by Lovely Wednesday at 8:37 PM 1 comments

Things Will Be Better In Chicago

Hello my lovely readers!
I wrote the below at the beginning of finals week and never had time to upload the pictures during finals, and then there was absolute hecticness of packing up, flying home, christmas in the woods, boyfriend coming to visit (he's still here), and all that jazz before I finally (boyfriend is playing nazi zombies on black ops with my brother :D) had time to come back and post this.
To those of you who contacted me during my absence, thank you for checking in--I really appreciate the thought. <3 I'm sorry it's been a while, and I'll have a few posts rolling right out for you in the next couple of days. I hope you all had happy holidays and got to spend some time with your folks and the people who matter most to you, and the people to whom you matter most. Without further ado, here is what I meant to post weeks ago.
<3LW

---------------------------------------------------------------
The pendulum of finals is swinging out to the left in preparation for the full swing of pain, antisleep, paperwork, flashcards, death, coffee, sweatpants, and insanity coming soon to a theater near you. Aka Thursday. Aka sorry I haven't been posting much, but here's what I wore a couple days ago, and will be wearing again tomorrow for my psych history class review session, because me and my fellow group project members did (and will again be) perform(ing) St. Augustine: The Musical, aka Chicago, but about St. Augustine. There will be a video, io prometo. Anywho, so it's saints in fishnets (try not to take offense at that phrasing... or at the act itself, for that matter--offense is not meant), and this is what I wore. 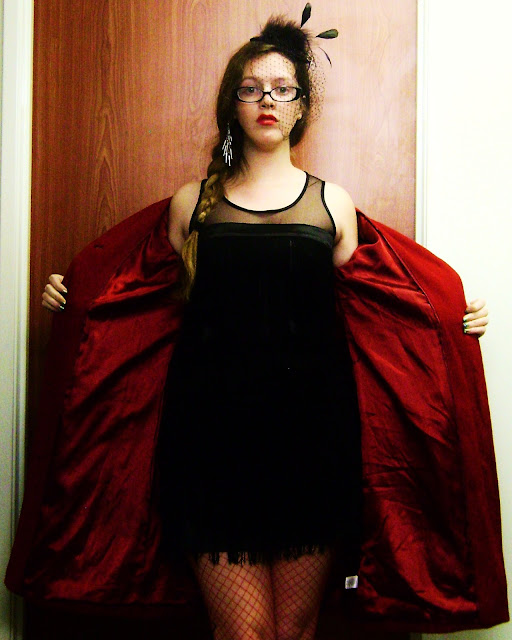 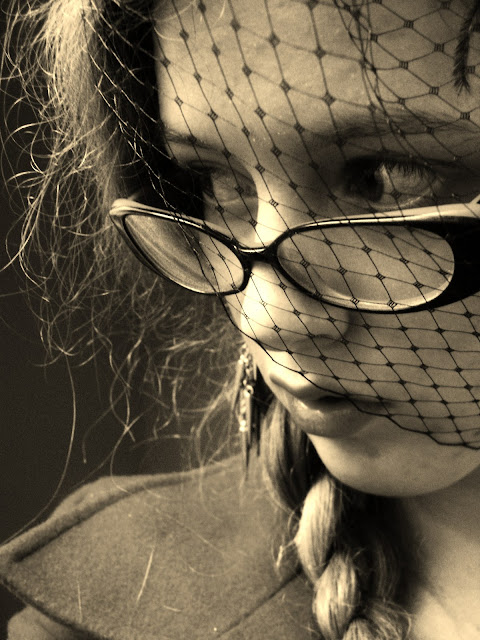 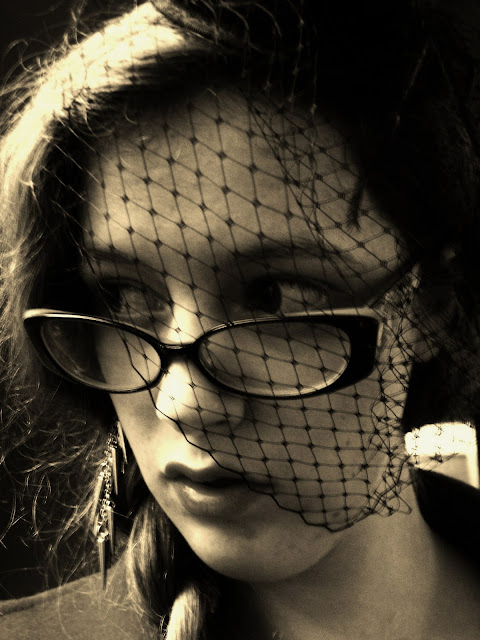 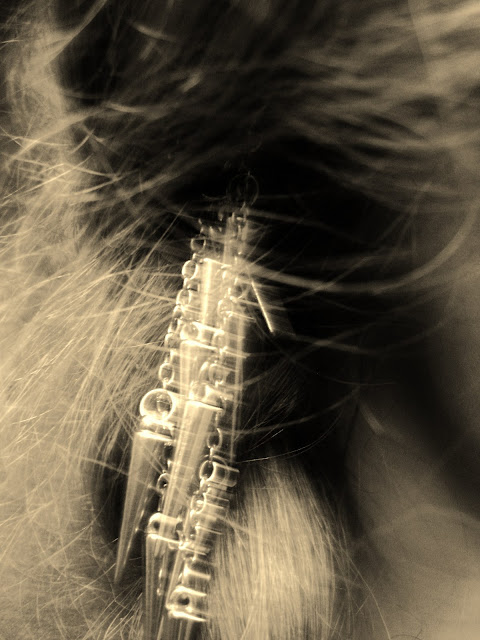 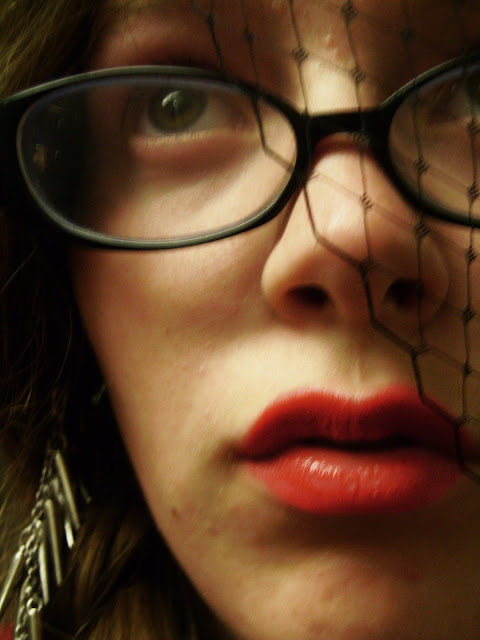 And, things will be better in Chicago. Aka after finals. Aka in the NETHERLANDS, because I'm doing study abroad next semester! WOOT! Notes on that later.