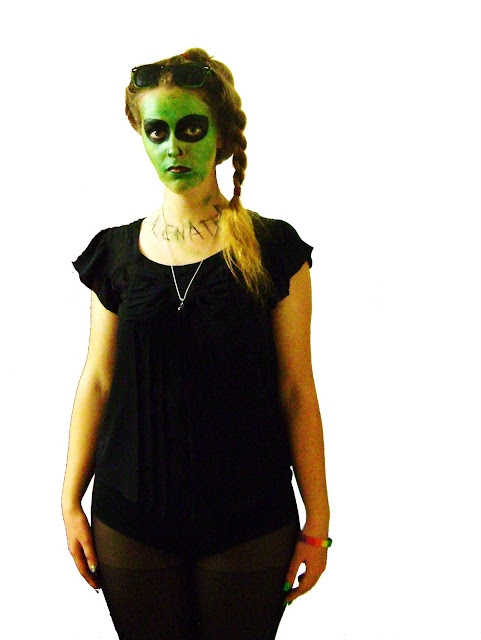 I wore this today for anyone and everyone who has ever felt alienated. Often, I don't really have anything concrete to say when people say, "Hey, what's with the hat?" or "Can I ask why your face is painted?" or "Why are you all dressed up?" other than simply that "It's more fun than wearing Nike running shorts, TOMS, and a T-shirt," or that "Life is a cabaret!" But today, for anyone who asked, I asked them in return, "Have you ever felt alienated?" Every single person said that yes, they had. And so I told them, "Then it's for you." 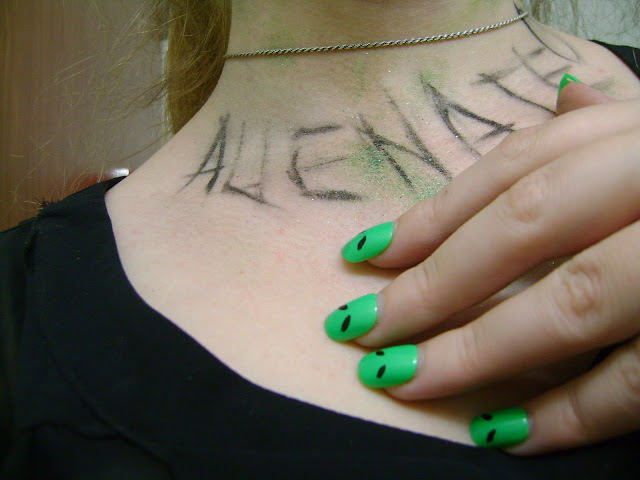 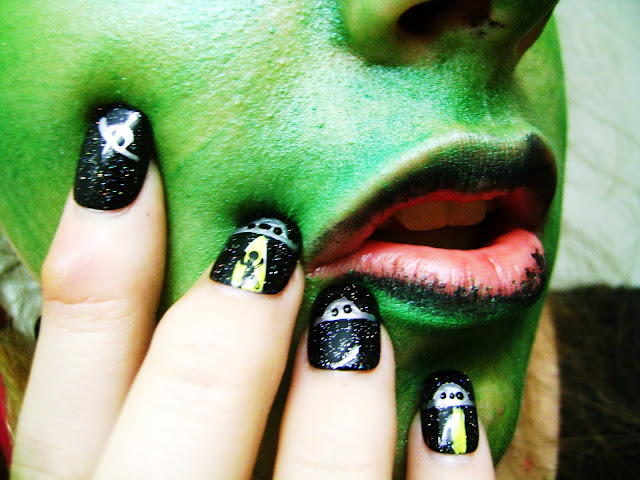 I seriously considered carrying around a portable speaker playing Katy Perry's "E.T." on repeat all day.
Sadly, even I'm not that cool... yet. ;-)
﻿
﻿

Read the Quick Update or Be Quick on the Up-Take

Hey hey,
I have about two readers of this blog (if that), so chances are that nobody will notice, but I'ma be posting out-of-date outfit posts from a while back under the dates (or thereabouts) that I took them, so if random posts appear where no post has gone before, that's why. Hopefully, however, they will be awesome posts where no post has gone before.
A tout a l'heure!
Love from Lovely <3
Posted by Lovely Wednesday at 8:54 PM 0 comments

We All Live In A Yellow Submarine

I would like to take this moment to express just how much I miss Mexican food. I mean real Los Angeles Mexican food--and yes, I'm aware that Los Angeles is not Mexico, but damn does a plate of carnitas and tacos de lengua from Tacos La Estrella in Highland Park hit the spot!
One would think that the Mexican food in Texas would be just as good as the Mexican food in California, but No, Siree, you are gravely mistaken. Mex-Mex food is tres hard to find in a place overcome by the dreadful invention of Tex-Mex. Now, I have nothing against food genres that rhyme in general, and there are some good things that have come of large numbers of Germans and Mexicans congregating in the same space (such as the polka, for example), but Tex-Mex is not one of those good things. I'm not gonna go pointing fingers at specific restaurants, but fabulous decor will only get you so far in running a Mexican restaurant if you don't carry horchata. I've already had to start carrying my own chopsticks to local Asian restaurants (Chinese and Vietnamese, namely)--do I have to bring my Klass horchata mix to Mexican restaurants, as well? Okay, enough spoiled food princess (that's "spoiled princess of food," by the way, not "princess of spoiled food..." euch) for today.

Today's outfit was not inspired by a Fiesta Rainbow--it really can't have been, since I've never seen a rainbow while attending a fiesta, at least not so as I can recall--but among the odd comments I recieved today (they're different every day, although there are always the classic "what's the occasion?" and "why are you dressed up like this?") were two "Festive!"s and at least three "Fiesta!"s. Who knew?